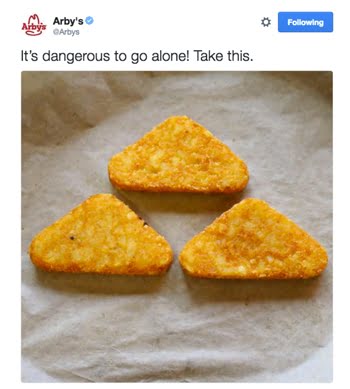 For the last year or so Arby’s has been killing the social media game with their nerd-centric posts. From simple art made from curly fries or drawn with Arby’s sauce to elaborate 3D models crafted from sandwich boxes, the posts routinely get tens of thousands of Likes, thousands of Shares, and thousands of comments on Facebook. For a fast-food chain, that’s unheard of. Heck, that’s better than Internet celebrity, Star Trek star, and social activist George Takei gets on most of his posts.

The Director of Digital & Social Media at Arby’s is Josh Martin. He works with a team of social media and art experts at the Roar Groupe in Atlanta. Roar Groupe Art Director Jennifer Barclay is a cosplayer and lover of nerd things. When her team pitched to Martin the concept of a Legend of Zelda triforce made from potato triangles, he spent a lot of time convincing his bosses that it would be a hit. It was, and their popularity has just grown since then.

Nerd culture is hugely popular these days, particularly on the internet, but that alone can hardly explain the success Roar and Arby’s have achieved. So what it is about these ads that resonates so well with people and has them clamoring for more? It basically comes down to one thing: authenticity.

Even if you didn’t already know that Martin and the Roar Groupe were big nerds, you would quickly figure it out by looking at the posts. These are real nerds making art about things they love, not people deliberately trying to market products to the nerd crowd. How can you tell?

It’s demonstrated by both the depth and breadth of their knowledge. Their subject matter ranges from video games to TV/movies to anime to cosplay to comic books, and they don’t just stick to the stuff every nerd knows about. They dig into some obscure areas once in a while. I’m a pretty big nerd myself, and I don’t even get all the references they make. (The only area of geek love that seems to be missing from their posts is tabletop games. Where are the posts about D&D, Cataan, and Magic: the Gathering?)

In the comments of each post they double down on their expertise. They trade fandom in-jokes with commenters and make references to other nerd topics. In fact, I have never seen a comment from the social media team that did *not* make a nerdy reference, nor have I ever seen one that gave a straight answer to a non-nerdy question. They stay in “character”. Someone could research “things nerds like” on Google and come up with some nerdy posts, but going comment-for-comment with ardent fans is nigh impossible for anyone but another true fan.

Nerd culture has always appreciated and respected DIY’ers, from building computers and writing software to building elaborate costumes of characters. The fact that the Roar team is making fantastic pieces of art out of simple things you can find in any Arby’s gives them further nerd credibility, but the quality is also such that average people can see and appreciate the talent the people have. No matter what criteria one uses to judge it, I don’t think there is any question that it is *art*.

They have several different art styles that use over for consistency. The most obviously impressive ones are the creations made from Arby’s sandwich boxes, but the Arby’s sauce drawings and “sauce packets as people” animations are every bit as artistic. To take things even farther, they occasionally do behind-the-scenes live streams of creating the art for their posts so people can see exactly how much work goes into them.

There is not a single stock photo on the entire social media stream. These people are not phoning it in.

Probably the most crucial factor of the Arby’s social media success, and something that any social media needs to succeed, is being true to the concept of social media! Before advertisers took over social media, it was largely a way for people to share with their friends what they were doing RIGHT NOW. Very few people planned their posts; they felt very spontaneous because they were. People on social media don’t want to be advertised to. They want to see clever things and connect with their friends.

Though the Arby’s posts obviously require a lot of planning and work, they feel like social media posts and not like advertising. They never call out specific products, and they never use a call-to-action. They are all made with things you can find at any Arby’s, and they are all photographed at Arby’s. The lack of direct marketing and the on-location craftsmanship give the posts a spontaneity most advertising doesn’t have. When an Arby’s post shows up in my newsfeed, it doesn’t feel like an ad. It feels like particularly clever and nerdy friends of mine have said, “Ha ha, look what we just did while having lunch!”

Along with the spontaneous vibe, a sizable number of their posts are timely. They know which nerd topics are trending. They recently did a Mass Effect post during the week that the new Mass Effect game was being released, and they’ve been similarly timely for other movie and video game releases. They post about things while they’re new and people are excited about them, just like your friends do.

There are some other reasons their social media succeeds so well, like their perfect frequency of posting and probably some decent interest-based ad targeting, but those are trivial things compared to the authenticity. Any social media team member can learn a lot from examining Arby’s posts and analyzing the principles behind them. I know I did. Thanks Arby’s, for showing me what good social media is!

Here are just a few examples of what they’ve done:

« The Kentucky Pirate Festival
How We Measure Success with PPC »